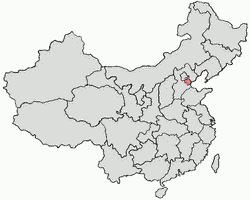 Beginning on September 16, 1941, St Innocent Mission Church in Tianjin was taken care of by the newly ordained priest Feodor Du. On July 30, 1950, he was consecrated as Bishop Simeon of Tianjin where he served until he became Bishop of Shanghai in September 26, 1950.

According to Kepping, Tianjin still had two churches in August, 1955. They were St Nicholas Church and St. Innocent Missionary Church.