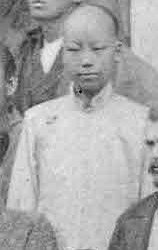 PAVEL (Paul) Wang Wenheng, aged 36. Before reaching 20 years of age, he was appointed to the post of catechist, since he was honest, obedient, submissive and a gifted communicator. He was particularly like-minded with Fr. Mitrophan. His words prepared many for the coming disasters, but some were skeptical about his words, and said he will be the first to apostatize. On June 2, his property was plundered and his house destroyed. Having taken what silver could be rescued, Pavel sought safety with pagan relatives. But they acted guilefully towards him: at first they took him in, then, taking possession of his silver, they chased him away. Pavel was a hard-working, thrifty and kind, but during the days of disaster, he had no food. This is how people repaid a righteous person. Pavel was martyred on the evening of June 10. Suffering the same fate together with him: his mother Ekaterina, 62; wife Sarrah, 37; son Ioann, 11; daughter Alexandra, 9. About Pavel, it is said that before dying he prayed to God on bended knees and hands crossed on his chest. About his mother it is said that before her martyrdom she, having poor eyesight, wandered around the city hiding from the Boxers; she was mistaken to be a well-poisoner, undressed and pushed into a bog.

JOACHIM, 19 yrs old, nephew of Pavel, was seized by the Boxers on June 4th and killed near the northeast tower of the city wall. He was the first among Orthodox Christians to die as a martyr.

INNOKENTY (Innocent) Fang Zhihai. Born in 1852, 24th day of the 5th month (咸丰岁次壬子年丙午月甲戌日); baptized in infancy. He had good singing ability and for a long time was the Mission school teacher. He was an honest and sincere person. Archimandrite Innokenty (later a bishop) greatly appreciated him, appointed him "econom" [housekeeping manager], and was preparing him for ordination to the diaconate. Innokenty's wife Elena (from the Shi family), 49 yrs. of age, their children: the elder son, Evmeny, 17 yrs.; the second son Ivan (who had gone through the Boxer Rebellion); the elder daughter Sophia, 9 yrs.; younger daughter Nadezhda (Hope), 9 years. On June 1, when the Boxers burned the church, Innokenty's house was also plundered and burned. The next day, Innokenty hid in Priest Mitrophan's house, and his wife with two daughters hid with relatives, but on the evening of June 2 these betrayed them to the Boxers. The Boxers returned the girls, but Elena was taken to an idolatrous temple where attempts were made to have her bow before idols, but she strenuously resisted. After this, in the street leading to the Āndìngmén Gate, she was made to kneel and twice struck on the neck by a dagger. Elena lost consciousness and the Boxers, considering her dead, ordered the guard to put her aside. By morning Elena regained consciousness. Noticing this, the guard released her from the matting in which she was wrapped, brushed soil off of her and released her. Christians, hearing what happened to Elena, led her to the house of Priest Mitrophan. Seeing Elena stained with blood and hearing her story, how she suffered for Christ, all began to cry and expressed the hope that the Lord would preserve her life. But as she began to recover from wounds, on June 10 she was to die a martyr's death with the others. Such was the will of God. That day, June 10, Innokenty, fleeing the Boxers through the courtyard wall, injured his face. On the morning of the next day, he sat at the Mission site well, holding his daughter Nadezhda on his lap. This girl was rescued from a fire, her hair was singed, her white shirt was dirtied with blood -- probably she was wounded by the Boxers. Fr. Mitrophan's son Sergy twice tried to convince Innokenty to hide. But he replied: "I and my daughter are wounded; it is difficult for us to hide; it is better to die near the church." Soon Boxers arrived. Innokenty, it is said, jumped into the well -- which had little water -- and the Boxers stoned him. When this well was dug up in 1903, four whole corpses were found there. They were buried under the altar of the Church of the Martyrs.

On the morning of the 10th, before the attack on the Christian's in Fr. Mitrophan's house, Innokenty's elder son Evmeny, together with his brother Ivan, was taken by one of the officers from the army protecting Beijing from the Boxers' violence to Nányuàn (南苑, southern military post near Beijing). It is unknown where Evmeny died. Innokenty's daughter Sophia, probably burned in Fr. Mitrophan's house together with more than 10 other girls.