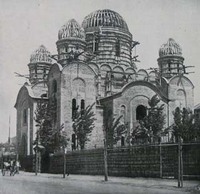 Appearance under construction in
Shanghai of the Cathedral. 1936

In the center of modern Shanghai near the brisk city streets (on perekreste the street Xinle-lu and street Xianyanbei-lu) costs a building of an orthodox cathedral. This construction singularity of the form and the unexpectedness of the presence at east city draws attention of foreigners and Chineses. Blue domes draw a look, high walls of a cathedral bewitch, force to slow down a step of passers-by hastening on the affairs. Very few people knows history of this interesting building.

It has been built in 1937 by Russian beloemigrantami, appeared on territory of China after October revolution and Civil war in Russia. These people have not recognized the Soviet authority and voleju sudeb have been expelled from the Native land. First time it was very heavy. Emigrants have appeared without means of subsistence, without habitation, without work. Besides the most part from them did not speak on-eeoaenee, in English. They were necessary to nobody. Without citizenship, without the native land, without the future.

The First years Russian in Shanghai dragged pity half-starved existence, lived basically on the handouts received from various public organizations. However little by little emigrants have started to be arranged, being employed on any, even black, work, and agreeing on any conditions to survive and support the families. Besides among Russian emigrants there were many engineers, tehnikov, people with a special technical education. There were among them also doctors, lawyers, economists, artists, architects, actors, musicians, military. All of them, eventually, have appeared demanded in Shanghai.

To the beginning of 1930th years Russian colony in the majority settled down in territory of the French concession and the International Settlement, has started to get features of a prosperous Russian large village in Shanghai. In the center of the French concession on avenue ZHoffr (nowadays - street Huaihaichzhun-lu) Russian shops, restaurants, confectionery, hotels, libraries, schools, institutes, cinemas and circus have started to open. Also branches of banks, mechanical workshops, garages for private machines, shops of fashionable clothes, theatres of drama and opera art, architecturally-art workshops, etc. Have been opened

If 1920th years for Russian emigrants became years " struggle for a survival ", 1930 - time of rise and blossoming of Russian colony in Shanghai. During all these difficult years Russian Orthodox Church granted hope and a consolation, not leaving the care of all requiring. In Shanghai during 1920-1930-o 12 orthodox churches (including a little house) have been opened, but also they could not satisfy need of believers completely. Representatives of Russian Orthodox Church in China (the Russian Spiritual Mission in China) for a long time dreamed of construction of the big Cathedral for Russian parishioners in which it would be possible to spend solemn services during greater religious holidays. However construction of the big temple demanded significant means which was not.

The Chapter of the Shanghai Orthodox Church archbishop Simon in 1928 for the first time has addressed to Russian orthodox believers with an appeal to collect money for construction of the big orthodox temple in Shanghai. Despite of wide enthusiasm of parishioners, money it was possible to collect very little: well-being of Russian emigrants left much to be desired. Nevertheless, the construction of the Cathedral was constant dream of lord Simona. Again with an appeal about fund raising on the Orthodox temple it has addressed in 1930 already deeply sick person. This time the Church loan has been declared - for everyone 10 dollars of a payment were promised 100 dollars of return with annual percent 6 %. The Total sum of the loan has made 30.000 dollars.

In February, 1933 archbishop Simon has died. During a life bishop Victor has borrowed in realization of its dream. Owing to its energy and will, the construction of a temple has been begun despite of rather poor means.

The First, on an appeal of lord Victor to believers, the owner of Russian building office of A.A.Rejer which has at own expense hammered in piles was responded and has laid the foundation the Cathedral. This work was estimated in 15.000 dollars. After A.A.Rejer, on the base of a temple have written down the names: doctor N.N.Kuznetsov, engineer N.A.Belanovsky, century I.Dukin, etc., the made greater donations.

It is necessary to carry the Russian emigrant A.I.Gess who has constructed at own expense a part of a roof To large sacrificers and expressed desire gratuitously to establish electric illumination in a temple. Active participation in construction was accepted by new Shanghai bishop John.

At ceremony of a bookmark of the Cathedral was present more than 1000 person: public figures of Russian emigration, members of the French municipal council, heads of the Chinese city, it is a lot of foreigners.

The Cathedral was under construction under the project and drawings of the Russian architect and artist J.L.Lihonosa. Technical supervision was conducted by engineer B.F.Zinzinov and its assistant engineer N.A.Belanovsky. On arrival to Shanghai bishop John, supervision over construction has passed to it, and in view of absence of engineer N.A.Belanovskogo, on its place engineer F.A.Zaharov has entered. All affairs of construction of the Cathedral chairman of Technical Advice lord John and the Building Technical Advice subordinated to it which members were exclusively Russian emigrants knew.

In Technical Advice consisted: the chief of the Russian Spiritual Mission in China bishop Victor, bishop the Shanghai John, their assistants engineers N.A.Belanovsky and F.A.Zaharov, the architect and the engineer of Century A.Fedorov, engineers Items Unterberger, And. Century Kuklin and J.A.Jurev, doctor N.N.Kuznetsov, lawyer N.A.Ivanov and the businessman of Century I.Dukin.

The Height of the Cathedral in the name of Bozhiej Mothers-nii?o?ieou guilty (so the temple began to refer to officially) has made 35 meters, it is decorated by 5-th domes and walls of the Kremlin style. Its limiting capacity made nearby 2500 person. In the Cathedral the chorus from 300 person could be located. The total cost of a construction and the equipment of a temple upon termination of works has exceeded 150.000 dollars. It was pride of all Russian emigrants in Shanghai, named it " the Kremlin the Chinese Orthodoxy ".

Upon termination of the Second world war some emigrants have returned home, to the USSR, another, the most part of Russian shanhajtsev has gone from China to search happiness in other countries - to Australia, the USA, Latin America. The number of parishioners has sharply decreased, as orthodox Chineses was not so much.

After formation of the Peoples Republic of China (1949) in the Cathedral services for few remained Russian parishioners, and also orthodox of Romania, Greece and other countries continued to be spent. In 1965 has died dean Du Zhenchen. Then in the Cathedral last service has been lead.

The Next 20 years the premise of the Cathedral was used under a warehouse. Then in its extension there was a restaurant, and the building has been transferred in the order of stock exchange. This construction is considered historical sight of city and is protected by the Shanghai municipality as a monument of history and culture.

Today in a temple civil work are conducted. Lists were not kept, but grandeur and severity of the Cathedral still impress. Workers remove a laying of a floor and brick muftu bearing beams. Under our information, the private persons who have taken a building in rent, plan to arrange oaioaaaeuii-entertaining show in a former orthodox temple.

There Are no words to express bitterness. It is thought, that in new, XXI century, people will learn to understand and respect more deeply with national and religious feelings of other people. Orthodox Russian diaspora of Shanghai: tourists, students, businessmen, diplomats, - should not look at transformation of church into object of a profit and careless entertainments silently.

We have an offer of other character: instead of show and dances in Russian Cathedral it is possible and it is necessary to arrange the Museum of emigration. Not necessarily only Russian emigration. In fact in Shanghai there were Englishmen, the Frenchmen, Germans, Americans. It is thought, that materials for this museum it will be typed much. It is necessary to restore lists of a temple, to restore an interior as it is made, for example, in orthodox church in Harbin. If to declare fund raising for this purpose, money will be not only at the charitable organizations, but also in cultural funds, in government agencies, etc. Not only Russia, but also the Peoples Republic of China, emigrant societies of Australia, the USA, Foreign Russian Orthodox Church, the Moscow Patriarchy should respond to an appeal to restore a temple, having transformed it in the center of enlightenment, studying of history of emigration and culture of first half XX of century.