Place: of Birth: The eparchy of Tomsk
of Death: Beijing 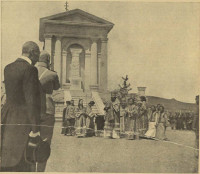 Innokenty (Figurovsky), Metropolitan of Beijing and China.
Born February 22, 1863 in the family of a priest of the Kiriko-Iulitinsk Church in the village of Panovsky.
In 1878 completed spiritual [pre-theological] school in Krasnoyarsk.
In 1878 entered theological seminary in Tomsk; left after completing 3rd year.
In 1883 appointed to duties of chanter in the Church of the Presentation, in Blakhtinsk, in the Achinsk district.
In November 1883, married 18 year-old Anna, the eldest daughter of the priest-in-charge of the Presentation Church, Pyotr Seimov.
In 1884, ordained a priest of the Yeniseisk eparchy.
In 1886 entered the 4th year class of the St. Petersburg theological seminary, which he completed in 1888. Entered the St. Petersburg Theological Academy in the same year.
In 1890 received monastic tonsure.
In 1892 completed the academy with a degree of candidate in theology and was appointed inspector of the Alexander Nevsky spiritual school.
In 1894 elevated to the rank of archimandrite and appointed rector of the Petersburg Theological Seminary.
1895 — Priest-in-charge, Moscow's "Protection" [Pokrov] Missionary Monastery .
From 1896 — leader of the 18th Chinese spiritual mission to Beijing.
June 3, 1902, consecrated bishop of Pereslavsk, vicar of the Vladimir eparchy. The Consecration took place in in the Holy Spirit Cathedral of the Alexander-Nevsky Lavra.
Administered the Beijing mission for 33 years.
In 1921[1], named Archbishop of Beijing.
During the last days of his life, he is commemorated as the Metropolitan of Beijing and China.
Died June 28, 1931.
Buried in the crypt of the Church of All the Holy Martyrs in Beijing[2].
He was a man of a great, penetrating mind, with enormous energy and a firm advocate of Orthodoxy.
Expert on Chinese language. Knew 62 thousand Chinese characters. Chinese professors turned to him for explanations of incomprehensible characters.
Relatives: mother- the nun Manefa, died in 1911 (burial service on November 20). 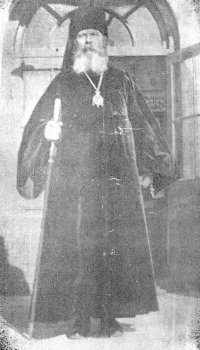 Duties and places of service