Coming of Age for a Young Chinese Martyr 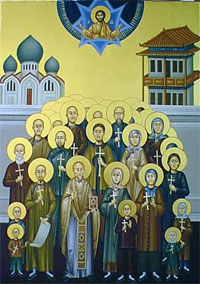 When reading accounts of the Chinese Martyrs, one has to bear in mine that the ages given of the Martyrs at time of their death, are rendered according to the traditional Chinese method of calculating age.

Unlike the western method of calculating age, which starts at the moment of birth into this world, and increment at the anniversary of the birthday, the Chinese method[1] of calculating age revolves around the passage of each lunar new year's day with the first new moon.[2]

Unlike western culture, in Chinese culture it is common courtesy to ask someone for their age, so the younger can greet the elder with a specific Chinese title of respect, especially among relatives. Normally one would ask, "How old are you this year?" The response would be the age for the current lunar year, even if your actual birthday has not passed yet.

There is also an ancient Chinese tradition where the month of conception is used as part of the formula in predicting the gender of the child before birth.[3] Predictions as to the gender is not an exact art and only our God knows with certainty. What we can do is sing with King David, "Thou hast covered me in my mother's womb. I will give thanks unto Thee, for I am fearfully and wonderfully made: marvellous are thy works."[4] Now we can appreciate that indeed a baby has come to an age of practically one at birth if we consider the nine or ten precious months in the womb.

A more important Chinese tradition is that if a new born survives outside the womb for one full month, there is a call for a banquet with red egg and ginger [5] for all relatives. This was a milestone especially in the old days when child-bearing was a life or death situation for both mother and child. The custom of having full month banquets is still kept to this day. Likewise, the Church considers it to be meet and right to gather together as one family, the Church, in celebration for the churching[6] of mother and child on the fortieth day after birth or thereabouts.

One young martyr of the Boxer Rebellion of 1900 is the little boy St John who suffered mutilation of body for outspokenly upholding Christ in the face of his persecutors. We do have an account that he was at an age of eight at the time of his martyrdom.[7] If we use western rendering, he would be age seven, or even six if his actual birth date was after June of 1893. What a powerful witness of Christ at such a young age!