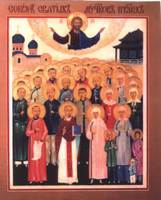 Orthodoxy arrived in China in 1685. In the first century-and-a-half of its presence in China, it did not attract a large following. It is said that in 1860 there were not more than 200 Orthodox in Beijing, including the descendants of naturalized Russians.

In the second half of the 19th century, however, the Orthodox Church made bigger strides. The Spiritual Mission of the Russian Orthodox Church in Beijing was blessed with scholarly and religious clergy. Numerous translations into Chinese of religious publications were made. [Access them online]

The Boxer Rebellion of 1898-1900, an anti-Western and anti-missionary uprising in China, saw violent attacks on Chinese converts to Christianity. The Orthodox Chinese were among those put to the sword, and in June every year we commemorate the 222 Chinese Orthodox, including Father Mitrophan, who died for their faith in 1900 during the upheavals as remembered on the icon of the Holy Martyrs of China shown above. In spite of the uprising, by 1902 there were 32 Orthodox churches in China with close to 6,000 adherents. The church also ran schools and orphanages. [Read more history]

106 Orthodox churches were opened in China by 1949. In general the parishers of these churches were the Russian refugees, and the Chinese part was about 10, 000 persons. The "cultural revolution" destroyed the young Chinese Orthodox Church almost totally. [Catechizing the flock]

The revival of the Orthodox Church in China started in the middle of the 1980s. In Harbin the church in the honour of the Protection of Our Lady was opened first. In 1986 few Russian refugees and the Orthodox Chinese were allowed to pray there. [Read the latest news]

Through the prayers of the Holy Chinese Martyrs,
O Christ God, be merciful unto us and save us.

Send inquiries or suggestions to:
info...@orthodox.cn