From the editor: In recounting the presentation in Petersburg of Olga Nikolayevna Kulikova-Romanova's book, "The Imperial Family" we stated that she was asked a question about the fate of the Alapayevsk Martyrs, whose precious remains are hidden on the territory of the former Orthodox cemetery in Beijing. This question was asked via the Internet by Dmitry Napara, whose articles have already appeared in the "Russian Line". Today we publish his article detailing the fate of the remains of the Romanoffs who accepted death as martyrs in Alapayevsk. By publishing this article we would like to contribute our little mite to the great effort of searching for and bringing the Alapaevsk Martyrs home. Recently the ashes of many outstanding figures of Russian culture who died in exile have been returned to Russia. The re-burial of Empress Maria Fyodorovna is being prepared. This process of the Russian people's coming to their senses can only be welcomed.

We hope that our Church leadership will bring to the attention of appropriate government structures the question of the necessity to transfer the precious remains of the Alapayevsk Martyrs. This would be an important step towards the spiritual revivification of society, finally overcoming the tragic division of the Russian people into "red" and "white".

Tight, powerful, resilient blows -- like a shot fired in the silence of a training field. The white ball flies like a big old poplar tree at the right edge of the golf course. The Chinese players take measured aim, make some approximate strokes with the club and -- a sharp banging blow. A shot. The well groomed lawn of a field for learning the game of golf. A small, stylish wooden house is nearby -- it is possible to sociably drink some tea or something stronger. The measured, easy life of the middle class. Or those with pretensions for the middle class. 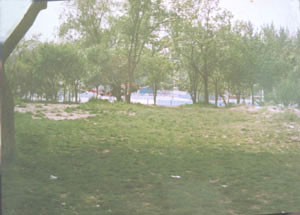 Site of RSMC cemetery in Beijing

And only the old poplar at the course's right edge, at the grid of the partition, serves as an authentic reference point for the descendants of the Albazinians to precisely mark the place where, up to the end of the '80s of the last century, there was a chapel in honor of Saint Seraphim of Sarov. In the crypt of this chapel, built on the cemetery of the Russian Spiritual Mission in China (RSMC) especially to accommodate eight coffins with the remains of the Alapayevsk Martyrs, there still lie six neglected coffins of the innocently killed members of the Russian Imperial House.

At the end of the '80s of the last century, with full connivance of the USSR embassy in China, the Russian cemetery fell into a reconstruction zone -- the PRC capital was growing and needed new building area. The unoccupied spaces around the cemetery were turned into the Qīngniánhú Park ( 青年湖公园, "Lake of youth"), while the cemetery itself became a golf course. The embassy of independent Russia has no interest in the Alapayevsk remains. Any mention of the royal remains being nearby (only 10-15 minutes by car from the embassy's central building) arouses long attacks of poorly concealed disdainful hostility. But this isn't what we're talking about. We'll ignore them; let them continue to believe themselves to be the ultimate possessors of truth. It's better to refresh memory with well known facts.

On the night of July 18 (all dates are new calendar), 1918 the Bolsheviks committed a customary evil deed -- the murder near Alapayevsk of Grand Duke Sergey Mihailovich; Great Princess Elisaveta Fyodorovna; prince-brothers John, Konstantin and Igor, sons of Grand Duke Konstantin Konstantinovich; Prince Vladimir Pelei, son of Grand Duke Pavel Mihailovich from a marriage with someone of lower rank; Fyodor Remeza, secretary to Grand Duke Sergey Mihailovich; Varvara Yakovleva, nun from the Martha-Mary benevolent monastery. In October of the same year the bodies of the innocent murder victims were found, examined, washed and put in coffins which had been placed in the Alapayevsk cemetery church. On October 18, the coffins were solemnly transferred to St. Sergius Cathedral in Alapayevsk and placed in the cathedral crypt, where they remained until July 1919, when on July 14, accompanied by hegumen Seraphim and two novices all eight coffins left in a freight car by rail from Alapayevsk to Chita. At the end of August all coffins were placed in the Holy Protection convent in the city of Chita. In March 1920, accompanied by hegumen Seraphim the eight coffins with the martyrs' bodies departed by rail from Chita for China. In mid-April of 1920 all eight coffins arrived in Beijing via Harbin. All these facts are described in detail in many reliable sources (including the incident with Prince Ioann Konstantinovich's coffin on the border of Russia and China).

In Beijing on the date of the arrival there of the coffins with the Alapayevsk martyrs' remains, there existed an instruction (order, ukase, law - however phrased) forbidding bringing coffins with dead bodies into the city. The territory of the Russian Spiritual Mission in China was situated within the city wall, in the northeast border of the interior city territory. Therefore, it did not seem possible to bring the coffins onto the territory of the RSMC. Eight coffins with the bodies of martyrs were placed in the underground crypt of the St. Seraphim of Sarov chapel which was situated in the center of the RSMC cemetery, which was beyond the city wall ( Āndìngmén Gate, 安定门) to the north west of the RSMC territory.

In November of 1920 two coffins with the precious relics of the Grand Duchess Elizaveta Fyodorovna and the nun Varvara were taken from the crypt and brought to Jerusalem. The other six coffins remained in the chapel's crypt on the mission's cemetery. (For detailed accounts see, in particular: G.V. Melikhov, White Harbin: mid 20s-M: Russian Way, 2003, pp. 135-143; K. Kepping, Last Works and Documents. - St. Petersburg: Omega 2003, pp. 274-279).

After China's occupation by Japan and the change in political conditions in 1938, the 20th mission chief, Archbishop Viktor (Svyatin) managed to get the permission of Beijing authorities and transfer the six coffins to the crypt of All Holy Martyrs Church, located in the cemetery of the RSMC territory. According to Archbishop Viktor's sister's testimony, written down by her own daughter, Xenia Kepping, in 1947 was ordered by Soviet authorities to transport the coffins with the Alapayevsk martyrs' remains back to territory of the mission cemetery and the place them in St. Seraphim Chapel's crypt. During the so-called "great cultural revolution" of 1966-1976, the Russian cemetery was subject to violations and destruction. Finally, by decision of Beijing's municipal authorities in 1987, the Russian cemetery was wiped off the face of the earth.

But -- however many eyewitnesses of those events we sought -- not a single oral or written account states that the coffins of the Alapayevsk martyrs were destroyed during this government vandalism.

On the contrary, Máo Zédòng's personal translator, comrade Lǐ Yuèrán (李越然, with whom I was closely acquainted from the end of the 80s of the last century until his death in 2003; repeatedly visited his home in Beijing; knew his wife and sons), when I asked about the fate of the Alapayevsk martyrs' remains, he repeatedly stated that "these coffins were cemented by the authorities and are in a park in Qingnianhu". In the opinion of this old convinced communist, "the time has not yet come to return these coffins to Russia, since at their return it will be necessary to provide a political evaluation of those who opposed the system that won in China in 1949..." We'll leave these judgments without comments. His testimony is important to us merely because it states that the coffins with the Alapayevsk martyrs' remains were not destroyed during the years of "the cultural revolution" and are located in the cemented crypt at the site of the St. Seraphim of Sarov Chapel. It is unlikely that Beijing Authorities would have decided to transfer them to another place.

The assumption that the coffins with the Alapayevsk martyrs' remains are still in the ground of the above-named park, is also indirectly confirmed by the fact that none of the living "Albazinians" (阿尔拜辛, " Ēěrbàixīn " is how this word sounds in Chinese transcription: 1685, the siege of the Albazin fortress, by the armies of Emperor Kāngxī (康熙) -- the beginning of the Orthodox diaspora in the Celestial Kingdom) ever mentions the fact of violations of the coffins of the Alapayevsk martyrs, their destruction, the destruction of the St. Seraphim of Sarov Chapel crypt, exhumation, etc. The descendants of the Albazinians persistently and confidently assert that the crypt is not hidden beneath the water of the Youth Lake, but is under the present golf course in the same park. 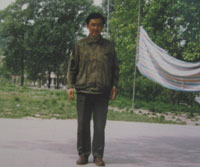 And the old poplar to the right of the entrance of the training field - it always grew there, south of the chapel, only then it was younger and more slender. And before the golf course was built, one could still see the cemented floor of the chapel. Where one of the glorious defenders of the Albazin fortress with the surname of Du, abbreviated in Chinese from the Russian Dubinin, had himself buried.