290th Anniversary of Establishment of the Russian
Spiritual Mission in China 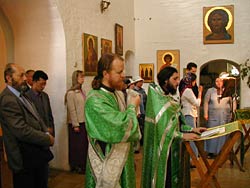 June 24 marks the commemoration of the memory 222 Chinese martyrs brutally killed for the faith in 1900 during the Boxer rebellion.

This year is also the 290-anniversary since the establishment of the Russian Spiritual Mission in China and the 100th anniversary of the consecration of the first bishop of the Chinese Orthodox Church -- a bishop subsequently elevated to metropolitan, Innokenty (Figurovsky). His episcopal consecration took place on the Day of the Holy Spirit [the day after Pentecost] , therefore Bishop Innokenty considered this holy day as the birthday of the Chinese Church.

The Russian Spiritual Mission in China was officially founded by emperor Peter I [Peter the Great] in 1712. However, Christian history in the Celestial Kingdom is considerably older. According to legend, Apostle Thomas was first to preach here. Extant historical sources indicate that many peoples in Western China professed Christianity during the I and II centuries and even later. With the beginning of persecutions of Christians in the Chinese empire and with the establishment of Islam in Western China, Christianity appears to have all but disappeared from the country. However, in China it is still possible to find ancient traces of Christianity relating to different periods of the country's history.

1900 -- a critical year in the historical destiny of China -- also marked a limit to the Russian Spiritual Mission. This year, known for the most acute outbreak of Yìhétuán Qǐyì (义和团起义), an essentially religious movement which, in Europe, due to a clumsy translation by the English, became better known as "Boxer rebellion". It was directed against foreigners, whose influence on the life of the Chinese empire in many respects was amplified with penetration of western missionaries. Anti-Christianity was this rebellion's ideology.

June 11, 1900 (June 24) was the most significant day in the martyrdom of the Orthodox Chinese. Here is the testimony of the Mission chief regarding their feat: "Even on the eve all streets were covered with leaflets calling on pagans to beat Christians and threatening death to anyone who would dare to hide them. On the night of June 11-12, boxers with burning torches appeared in all parts of Peking, attacking Christian dwellings, seizing unfortunate Christians torturing them, and forcing them to renounce Christ. Many, horrified by torture and death, renounced Orthodoxy to save their lives, and offered incense before idols. But others, not fearing torture, courageously professed Christ. Their fate was terrible. Their stomachs were ripped open, their heads were severed, their dwellings burned. Searches for Christians and their murder continued on days following the rebellion. After the destruction of Christian dwellings, they were taken outside the city gates to the pagans' idols, interrogated and burnt on fires. Pagan eyewitnesses testified that some of the Orthodox met death with astonishing self-sacrifice. The Orthodox catechist Paul Wang died a martyr's death with a prayer on his lips. The Mission school teacher Ia Wen was tortured twice. The first time, the boxers chopped her up and covered her half-dead body with earth. When she regained consciousness, her groans were heard by the (pagan) watchman who took her to his guard's booth. But after a while the Boxers seized her again and this time tortured her to death. In both cases Ia Wen joyfully professed Christ before her torturers... "

The history of the Russian Spiritual Mission in China is instructive: having managed for centuries to preserve the Orthodox faith among descendants of the Albazin cossacks who intermarried with Chinese and Manchurian peoples, Mission members accomplished much in the field of diplomacy, science. They laid the foundation for oriental studies in their homeland, and because of their work Russia and China never were at war. The Mission's history is inextricably connected to the names of the holy - heavenly patrons of China.

This year on June 24, the day of the Holy Spirit, a moleben [prayer service] was served in Saint-Prince Vladimir Church to the Chinese martyrs, with some prayers being read in Chinese. The prayer service, attended by many people, was conducted by priest Dionisy Pozdnjaev.