The light of Orthodoxy in China

In the period from March 15, 2003 till April 15, 2003 in accordance with the decision of the Holy Synod of the Russian Orthodox Church from July 17, 2002, the parish priest of the 5th Alma Ata district, the caretaker of Holy Prophet Elias' church in the town of Zharkent, hegoumen Vianor (Ivanov) made a second pastoral visit to Xinjiang Uygur Autonomous Region. 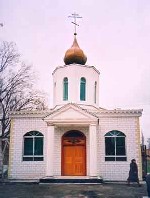 When I came to Urumqi (乌鲁木齐), I met the Orthodox inhabitants of the city with whom I got acquainted during my first pastoral visit. The meeting took place in the church of St. Nicholas, where after performing a short prayer service, we had a long conversation on different subjects. From the people who gathered there I got to know that during December 2002 the city was visited by an Orthodox priest from Australia (it should be noted that the Orthodox from China don't make differentiation between the Russian Orthodox Church and the Russian Orthodox Church Outside of Russia), who in the home of some of the faithful performed the Sacrament of Baptism as well as a wedding for a couple.

After the sermon I performed the Sacrament of Baptism for two lads and two girls, to whom I immediately bestowed the Holy Communion.

The following day I met with Orthodox believers from Chuguchak, who lived at that time in Urumqi but have rarely visited the church because of, according to their words, the lack of priests. I invited them to visit the Church the following Sunday. I would like to note that the Orthodox people I was meeting did know very poorly and in some cases didn't understand any Russian. But it was pleasant enough to hear that even the 3rd and 4th generation coming from mixed marriages declare themselves in their personal papers, and what is most important of all, feel as Russians, trying to keep and an according disposition of the spirit and lifestyle. During my visit I met on many occasions with the Orthodox inhabitants of Urumqi as well as with tourists coming from Kazakhstan, Russia, Kirghizia, and other countries of the Commonwealth of Independent States. Among the tourists and commercial travelers there are many Russians, who visit China quite often in recent years, keeping close relationship with the Russian community of Urumqi. They bring here crosses, candles, icons, Orthodox literature - the things which although small in amount, but still can help get in contact with Holy Orthodoxy. According to the recounts of the local faithful, that is the dearest present they could get. Also it is good to note that the majority of the believers keep in their libraries issues of "Light of Orthodoxy in Kazakhstan", which enjoys growing popularity after the publishing of the issue from which the residents of Xinjiang Uyghur Autonomous Region found out that their church is being visited by an Orthodox priest, and thus that they are not all forgotten by the Orthodox Church. Hence, "Light of Orthodoxy in Kazakhstan" rekindles the light of Orthodoxy in China as well.

On Sunday, March 23rd, during the second week of Lent, in the church of St. Nicholas I took confessions and delivered the Holy Communion to 15 believers who earlier were informed by phone. Many from the ones who were present in the church didn't know about it and lamented that they could not partake in the Sacraments of Christ. I consoled them, organizing a confession and Communion on the following Sunday. I then prayed accompanied by a tape recorded Vespers, after which we completed a Thanksgiving Moleben. After the Service, we proceeded to the dining hall where a lenten meal was prepared. Than a sermon followed that was listened to by 37 people, locals and visiting Orthodox alike. This time the sermon was warmer and more confident. Many invited me to perform the Sacraments of the Church in their homes, gave thanks for already completed ones, and this what they've waited for years to come true.

On March 24th I came to Chuguchak ( Tǎchéng 塔城). The town is situated to the northwest of Xinjiang Uyghur Autonomous Region, 630 km from Urumqi. With a car that distance is passed in 9 hours time. During the last couple of years the roads in Xinjiang Uyghur Autonomous Region underwent some crucial repairs, thus making the travels more comfortable. Practically the same could be said about Chugachuk itself. The rapid economic growth of China changed the town to the level of unrecognizing; during that short amount of time two thirds of the city's buildings were built, a general renovation of all the old edifices took place, among them the buildings of the former Russian consulate as well. But still, the Orthodox church, destroyed during the years of the "Cultural Revolution" was not rebuilt.

In the town around 500 Orthodox live, and also in the surrounding villages live many Russians, as it is in case in Dorbuzhin where 50 Orthodox families reside. There are many tourists in the town, which is normal if taken into consideration that the border with Kazakhstan lays just 12 miles away where the border crossing of "Bahti" is situated.

In Chugachuk the meeting with the faithful took place in the home of an Orthodox family. The believers of the town were very friendly so the news about my arrival spread instantly. After serving the Prayer Service for the sanctification of waters, I baptized 15 people and then during the same day 14 more in addition, who came to know about the visit of an Orthodox priest from the ones who were present at the sanctification of waters. It causes a spiritual joy and delight to see with what sort of piety those people came, who for years (and some of them all their lives) haven't seen an Orthodox priest nor did take part in the Holy Mysteries of Christ, and now they just prayed and cried. The faithful of Chugachuk, as well as the other residents of Xinjiang Uyghur Autonomous Region asked that some Sacraments be performed at their homes, expressed sadness for the lack of church and a Orthodox priest in the town, and they have told me that there were even cases when some Orthodox crushed by such circumstances went to Roman Catholic and Anabaptist parishes.

On March 26th I served Panichida for the reposed at the local cemetery, which is in complete disregard, and could be soon completely leveled, since the city's building projects are carried out till the very fence of the cemetery. I gave advice to those who were present at the Panichida to plead more fervently before the authorities for reestablishment of a church.

On March 31st I went to Kuljha ( Yīníng 伊宁) where I met the caretaker of the church of St. Nicholas, Mrs. Galina Pavlovna, from whom I found out that the building of the church was completed. She asked for the church to be consecrated, and she also told us that there was no response from the authorities to her pleas that visiting Orthodox priests should be allowed to perform services.

During the following days I stayed in the town of Kuljha. I conversed with the faithful and visited homes. In the church of St. Nicholas I performed a prayer service with sanctification of waters followed by an Akathist to St. Nicholas. With a priestly rite I consecrated the church, after which I delivered a sermon on the meaning of the Church, and then congratulated the caretaker, the council and all the Orthodox for the completion of building work and the consecration of the church. In the newly consecrated church I baptized two Chinese under the names of George and Anatoly.

Summing up the results of this visit, it could be said that Orthodoxy in Xinjiang Uyghur Autonomous Region has a right to exist and it should spread and carry out the word of Christ.